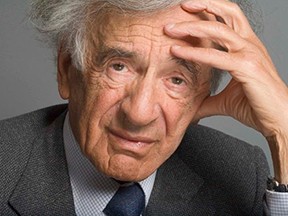 Federation Mourns the Death of Elie Wiesel, z"l
Holocaust survivor Elie Wiesel (z"l), the world renowned author, speaker, philosopher and Nobel Prize laureate, passed away on July 2, 2016 in Connecticut, USA. He was 87.
"Elie Wiesel had a profound effect on our youth. He invested tremendous energy and passion in the March of the Living to ensure the next generation would never forget the Holocaust," Adam Levene, President, Jewish Federation of Winnipeg.
Born in Sighet, Romania, Wiesel survived three concentration camps and was liberated from Buchenwald by the US Third army in April 1945. By the time he was 19, his career as a journalist had begun in France. He wrote for Israeli and French newspapers.  He moved to the US in 1955 to cover the United Nations as a journalist and became an American citizen in 1965.  Wiesel wrote 57 books most famous of which is Night. However, he was much more than an author: Wiesel was an academic, a peace activist, a founding member of the New York Human rights Foundation, helped establish the US Holocaust Memorial Museum and was a staunch defender of human rights.
"It is with deep sadness that we announce his passing to the Winnipeg community," Adam Levene.
May his memory forever be a blessing.